Summer in Spain and the Festival Frenzy

Summer in Spain has a certain charm about it and the numerous quirky festivals which take place throughout this season are sure to keep you on your toes all day and night. Get your calendar out because here is a list of just a few of the best:

April 23: Saint George Festival, Barcelona
Sant Jordi, or St George, is the patron saint of Catalonia (as well as England and about 10 other countries and regions). But St George’s Day in Barcelona is as close as they get to Valentine’s Day. The tradition is for the man to give the lady in his life a rose in return for a book, to mark the death of both Shakespeare and Cervantes who passed away on the very same day. Get out onto the streets on this day to be swept away by romance and the warm buzz of the street sellers.

April: Feria de Sevilla, Seville
Spring Fair, the Feria, comes two weeks after Semana Santa. In 2016, this will be around 12th to 17th April. The Feria is a festival of food, drink, music and traditional Sevillana dancing. A huge area just outside of Seville is dedicated to the fair, creating a small ‘town’ of casetas (tents or pavilions) for drinking, eating and hanging out. Sevilliano/as, in traditional flamenco dresses, or tight trousers and boleros, parade around on horseback and in carriages – providing you with some fabulous photo opportunities. This festival is not to be missed! 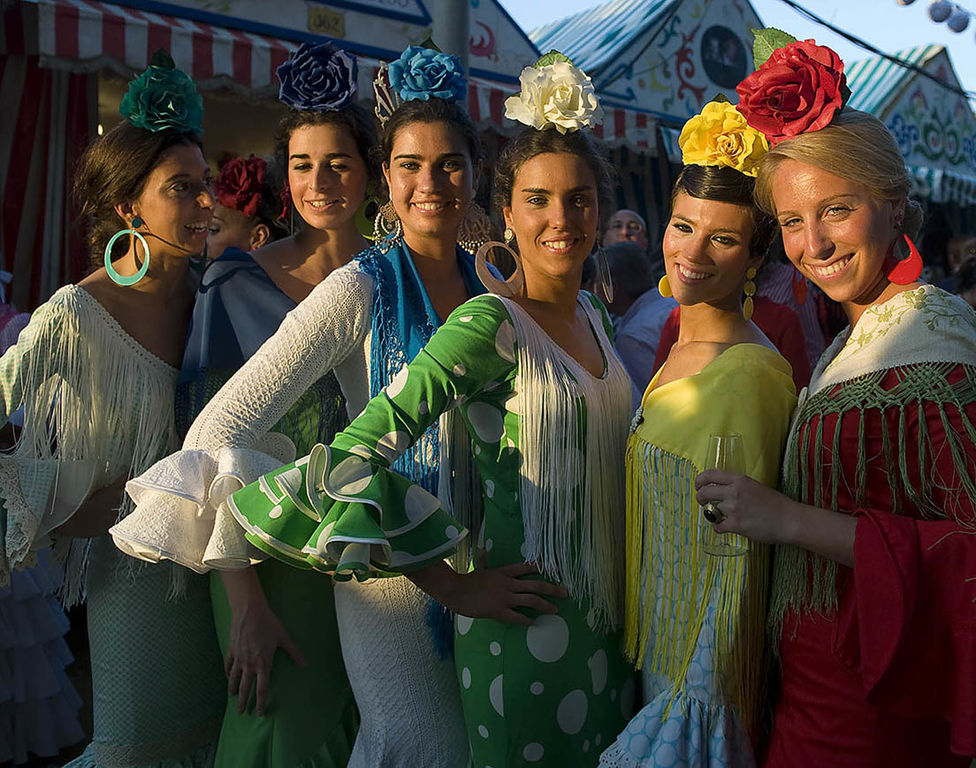 Mid-May: Fiesta de San Isidro, Madrid
This is Madrid’s largest festival, and it is a fantastic opportunity to sample tasty delicacies like thick steamy broth and wear the traditional castizo. The festival is launched by an opening speech in the Plaza Mayor and a grand procession of giants and cabezudos. Soak up the sun and the music while enjoying flamenco and Latin rhythms all over the city.

Late May: Feria de la Manzanilla in Sanlucar de Barrameda
If you like your sherry this should be right up your street, as the locals celebrate their local drink by drinking unhealthy quantities of it (along with consuming plenty of fish and tapas). The week officially begins on the Tuesday night when the lights are turned on, but festivities usually start early the previous weekend. Then on Sunday there is a spectacular fireworks display to end the festival with a bang.

June 20–24: Night of San Juan, Valencia and Catalunya region
This is a pagan celebration of the Summer Equinox. It’s the one night of the year that locals can light bonfires on the beach, barbeque and drink, and later everyone jumps over the fires and set off fireworks. Celebrations last until sunrise and beyond in some cases. Valencia and Alicante have the biggest parties, with celebrations in Alicante lasting several days and culminating in huge papier-mâché figures being burnt on the night of 24 June.

June 28–30: Haro Wine Festival
There are celebrations all over Spain to mark the wine harvest and one of the best is held in Haro in La Rioja region. La Batalla de Vino or the Wine Fight starts with a huge street party on the eve of 28 June. The next day the locals (and you too, if you’re lucky), climb up a nearby mountain and drench each other withrioja using sprays, buckets, water pistols, or whatever they can lay their hands on. The battle moves down the mountain and into the town where dancing and general merrymaking continues, all accompanied by the quaffing of lots and lots of vino tinto. Wear old clothes.

Late June to July: International Festival of Music and Dance, Granada
A celebration of flamenco and classical music that traces its origins back to the 1880s, and combines the vibrant energy of Spanish guitars, castanets and flamenco dancers. 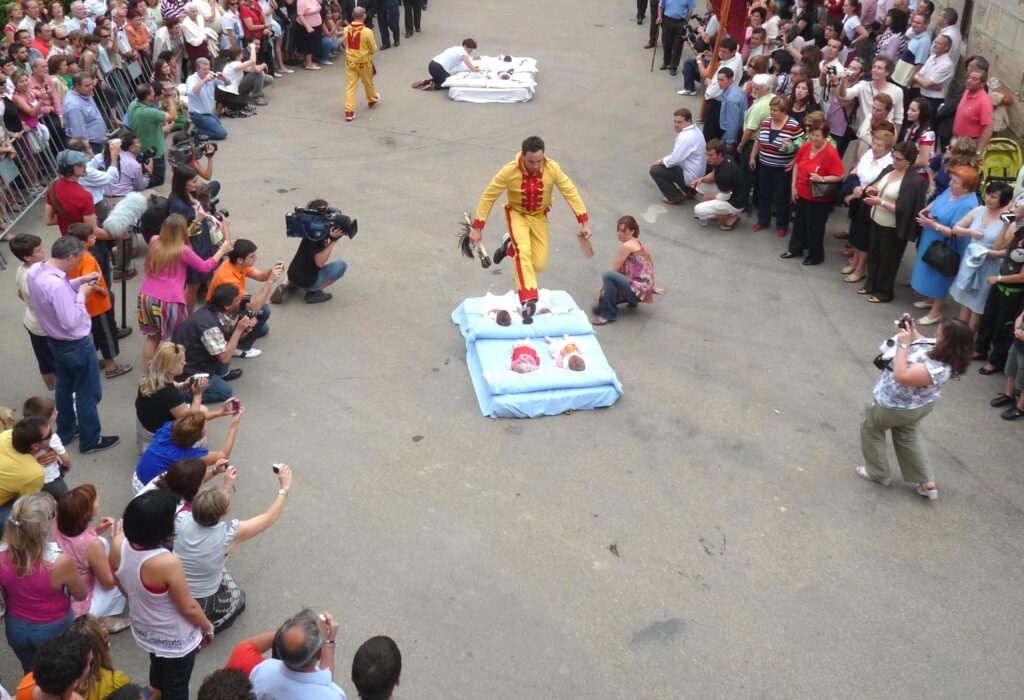 Mid-June: El Colacho (Baby Jumping) Festival, Castrillo de Murcia, near Burgos
The uniquely Spanish festival sees townspeople dress up in colourful costumes and form a queue to leap over a mattress laden with babies born during the previous 12 months. The ceremony rids the babies of evil spirits and guards against illness. This is one of the Corpus Christi festivals held all over Spain on the first Sunday after Corpus Christi, making it fall on 7 June 2016.

July 6–14: Running of the Bulls (Fiesta de San Fermín), Pamplona
This is one of Spain’s most famous festivals, and is a magnet for thrill-seekers and spectators from all over the world. Hundreds of thousands of visitors wearing white shirts and red bandanas for some serious partying and the bravest make a mad dash ahead of bulls careering down narrow streets. By night the squares are strung with decorative lights for drinking, eating, dancing, music and fireworks.

July 25: Feast of St. James, Santiago de Compostela
This religious event which commemorates the life and work of Saint James Theatre includes street shows, concerts and dance events are held at, the town’s patron saint who is reputed to be buried in the local cathedral. Religious services, during the Fiesta de Santiago Apóstol en Santiago de Compostela take place and those walking the ‘Camino de Santiago’ can time their pilgrimage to end at this event.

Late July: Near Death Festival, Neves
Those who have been close to death in the past year are carried through the streets of this town in coffins to thank Saint Marta, the ‘patron saint of death’. Known in Spanish as Romería de Santa Marta de Ribarteme. It might not be everyone’s cup of tea but it is certainly different.

August 15–21: Festa Major de Gràcia, Catalonia
This colourful, joyous festival is a must-see for anyone in the city in August. All year long, the residents of Gràcia work on elaborate decorations with themes such as marine life, the solar system, or even local politics, to hang in the streets. Each street competes to win based on the decorations and themes so quality and details is astonishing. By day, long trestle tables are set up for communal lunches and board games; at night, thousands invade the tiny streets for outdoor concerts, dances, and parties.

August 29–31: La Tomatina, Buñol, west of Valencia
This is the world-renowned, tomato-flinging festival held on the last Wednesday of August. Thousands of revellers use truckloads of overripe tomatoes as missiles and hurl them around like there is no tomorrow. The town now charges an entrance fee, so you’ll need a ticket to get in. Don’t forget to bring goggles and a change of clothes!

Late-September: San Sebastián International Film Festival
The premier film festival of Spain takes place in several theatres in the Basque capital around 18 to 26 September 2016. Retrospectives are frequently featured, and weeklong screenings are held. If you are a film lover, don’t miss out on this unique festival!

September 24: Fiesta De La Mercé, Barcelona
This celebration honours the city’s patron saint, Our Lady of Mercy (La Mercè). During the week around the 24th September each year, the city is abuzz with free music concerts, from traditional to contemporary and held in the plazas (particularly Plaça de Catalunya and Plaça Sant Jaume), and figures from folklore such as the gigants (giants) and cap grosses (fatheads). Locals come out to perform the sardana (the traditional Catalan dance) and to watch the nail-biting castellers (human towers). Firework displays light up the night, and the grand finale is the correfoc, a parade of firework-brandishing ‘devils’ and dragons.

Are you thinking about coming to Spain this summer to study a TEFL course? We offer accredited TEFL courses in Barcelona, Malaga and Cadiz. Read about our Trinity CertTESOL course here and find out more about how you could become a qualified English teacher. If you need a visa to come to Barcelona to study or work, we provide a comprehensive visa service and offer the Developing Teacher course with Spanish in Barcelona which meets the requirements for a Student Visa.