Kristel: Where are you now?

We got in touch with one of our Trinity CertTESOL graduates to find out where her certificate took her after the course. Our graduates often travel to other countries to work so that they can experience what it is like to live abroad and get to know other cultures. One of the great things about the certificate is that it is recognized everywhere by employers. Find out here what Kristel is doing now:

1.    Which location and date did you take your Trinity CertTESOL?

2.   Why did you choose that location?

Due to a wedding nearby Prague a couple of weeks earlier, I was bearing the city freshly in mind. Because I knew the course would be intense, I thought it would be better to go to a place I already knew, in order to avoid wandering around too much. The starting date for Oxford TEFL Prague also fitted my schedule regarding work and emigration perfectly. Thus I was supereager when I found out about Oxford TEFL Prague. I booked a place to stay via Airbnb nearby the Petrin Gardens and hopped on the plane two days after my last working day in Amsterdam. The city was magical in November, still covered in this autumnal sphere, yet preparing for the Christmas days. Despite the long hours there were enough moments to enjoy this vibe.

Two weeks after the end of the course I flew to Costa Rica (quite a switch, going to the tropics in December), where I travelled with my boyfriend for about three weeks. Half of January we settled in Puerto Limón, a port city situated on the Caribbean coast.

My boyfriend was already working over there, so I simply joined him. Because there are no international organizations or whatsoever in Limón, I figured out teaching would be a great way to do something useful, not only for now, but also in the future. That’s why I joined the Trinity CertTESOL course.

Because I knew the new school season would start in February, I wanted to be around town half of January. Oxford TEFL also gave me a couple of great tips regarding Costa Rica. Finding a job was actually easier than I thought it would be. After two days I found a suitable one via craigslist, one day and Skype interview later I got hired. But I hear other stories than that as well; especially on this side of Costa Rica finding a job can be difficult. If you want to go to CR, start in San José, the city isn’t the best place in Costa Rica, but you won’t have a problem finding a job over there for sure. Finding students for private lessons isn’t all too hard and will get you started as well.

Right now I’m working at Rada/APMT, which is a container terminal company, situated in Limón on the main road next to the port (logically). I work over there twelve hours a week, teaching business English. As a beginner you are advised to start with ten hours, due to the preparation, so for now I’m fine like this.

At the moment I have three classes, divided from A1 up to C1. This idea would have me terrified three months ago, but I actually really like it right now. 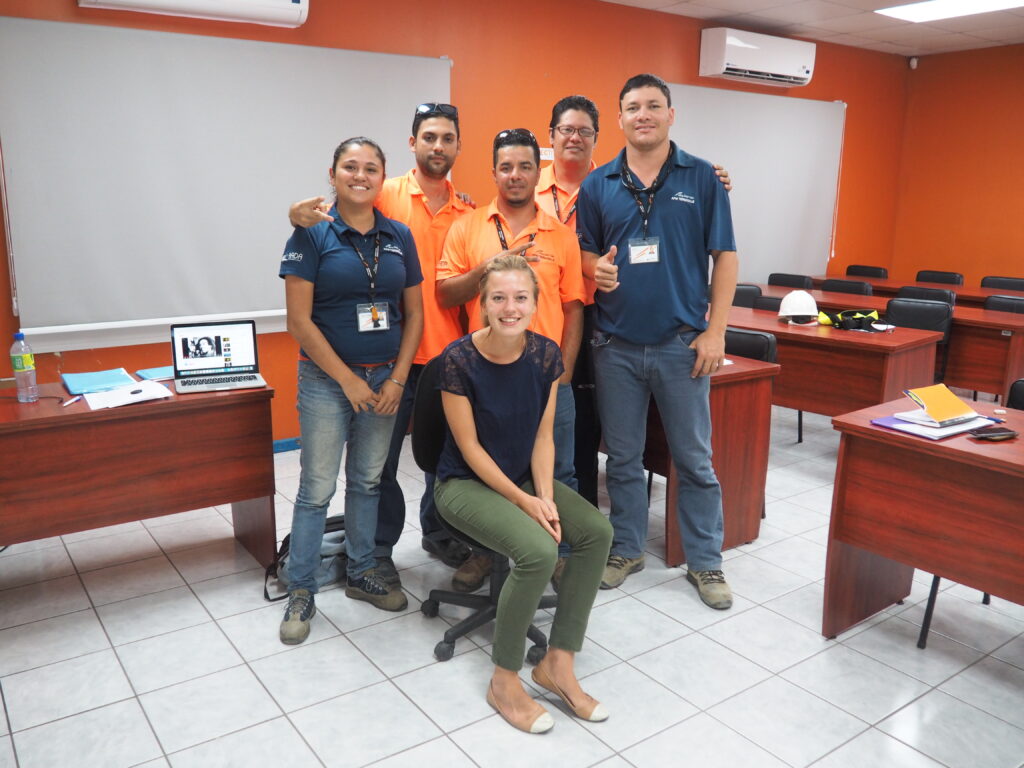 In general my students are laid back (‘pura vida’ is the national slogan after all), but very excited to learn English, really interested in my background and about traditions in Europe. They enjoy songs, TED lessons and slang language, as a variation to the business core of the lessons. They care about nature, not about culture (I once did a lesson on art, which was a total failure), love to talk about their families and traditions and prefer to go to the beach and chill out over there on Sunday, where I meet them from time to time. Tico’s (Costa Ricans) are in general very friendly and willing to help you out. Life is simple here, and they appreciate it that way.

The pay is $12,- an hour, which isn’t too bad at all. Unfortunately Costa Rica is rather expensive (it exceeds prices of most European countries; a jar of pesto will cost you $5,- for example), so you’ll have to work many hours to make an entire living out of it (or avoid eating pasta).

I don’t think anybody in Europe will believe me right now if I say it, but first thing that comes to mind (next to the obvious friends and family) would be winter actually. I’m quite fond of snow and cold temperatures, and therefore it feels rather odd to skip a season over here. They either know rain or sun in Costa Rica. That’s it. As one of my students explained to me: “We don’t have seasons over here”. The idea of spring or autumn is therefore very hard to grasp for them. Other than that, I miss going to museums, and eating ‘bitterballen’ which is both the most delicious and gross Dutch food ever existed. But hey, that’s a small sacrifice.

11.  What do you usually do at the weekend now?

So after my whining about the cold weather, I can also state that living in the tropics isn’t that bad at all of course. We live nearby Puerto Viejo, which is a great surfers town with a relaxed atmosphere. Usually we go to the beach, drink a coconut over there, have a barbecue, snorkel a little bit and watch the monkeys jumping in the palm trees. This weekend I’ll have my first surf attempt. Other than that, we go exploring the nearby jungle, or some inland volcanoes, or simply hang out at home in the hammock. There’s so much incredible nature to see in here. I’m trying to capture as much as I can with my camera and I am even able to sell quite of lot of my pictures online. 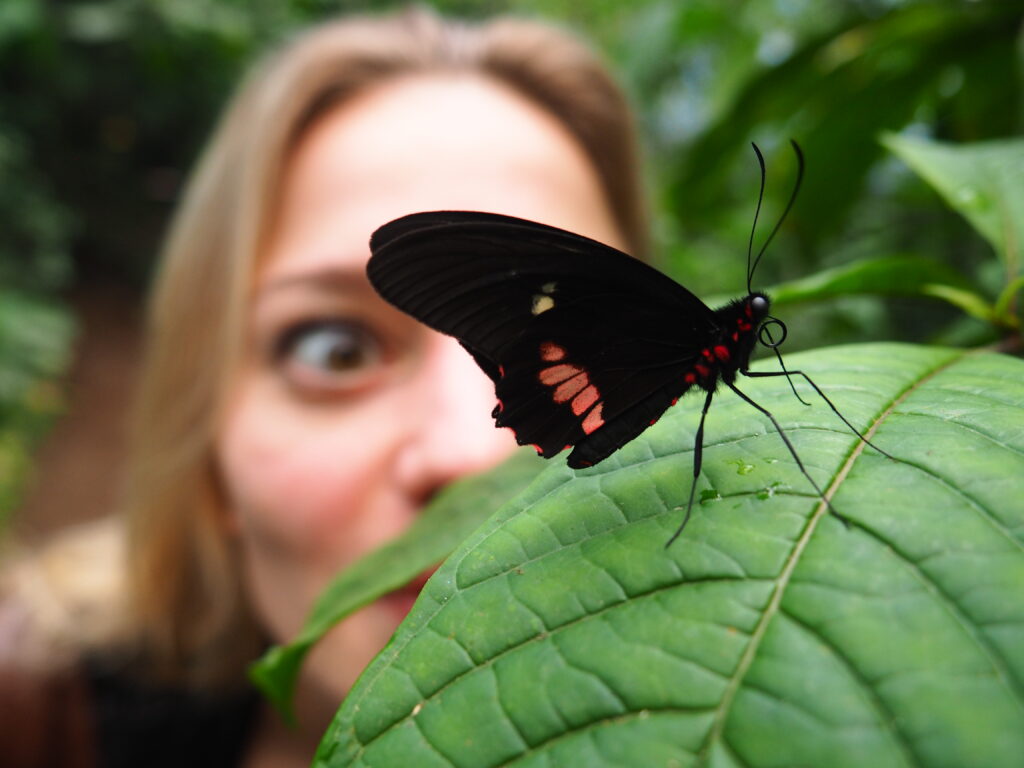 I have honestly no idea. Great, isn’t it? Even better is the feeling that I can go basically anywhere in the world, and that I’d still be able to survive over there. Oxford TEFL provided me with the basic real-life experience that I needed in order to do so. I didn’t felt like a rookie in front of the classroom at all when I was there on my own for the first time (or when the electricity suddenly was shut down last week), because the tutors gave us trainees tons of tips and clear instructions. They were always enthusiastic and created a nice atmosphere. You gain a lot of confidence in the end while teaching during the course, since you have lots of opportunities to create your own lessons and you have time to find out whatever does (not) work for you. Though the course was intense, I obtained some useful management skills, met great people and had a lot of fun in one of the most fairytale-like cities I have ever been!

If you would like to study or work abroad, you might consider taking the Trinity CertTESOLcourse in one of our centres. Get in touch to find out more or apply for the course here.

PrevPreviousVeronica: Where are you now?
NextTop tips for teaching Young LearnersNext